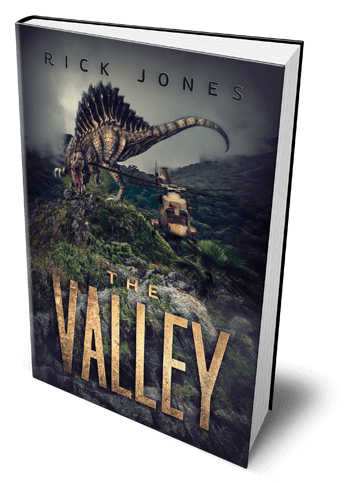 In a dystopian future, a self-contained valley in Argentina serves as the ‘far arena’ for those convicted of a crime. Inside the Valley: carnivorous dinosaurs generated from preserved DNA. The goal: cross the Valley to get to the Gates of Freedom. The chance of survival: no one has ever completed the journey. Convicted of crimes with little or no merit, Ben Peyton and others must battle their way across fields filled with the world’s deadliest apex predators in order to reach salvation. All the while the journey is caught on cameras and broadcast to the world as a reality show, the deaths and killings real, the macabre appetite of the audience needing to be satiated as Ben Peyton leads his team to escape not only from a legal system that’s more interested in entertainment than in justice, but also from the predators of the Valley.

Political dignitaries including the President of the Federation gather for a ceremony onboard Mausoleum 2069. But when a cloud of interstellar dust passes through the galaxy and eclipses Earth, the tenants within the walls of Mausoleum 2069 are reborn and the undead begin to rise. As the struggle between life and death onboard the mausoleum develops, Eriq Wyman, a one-time member of a Special ops team called the Force Elite, is given the task to lead the President to the safety of Earth. But is Earth like Mausoleum 2069? A landscape of the living dead? Has the war of the Apocalypse finally begun? With so many questions there is only one certainty: in space there is nowhere to run and nowhere to hide.